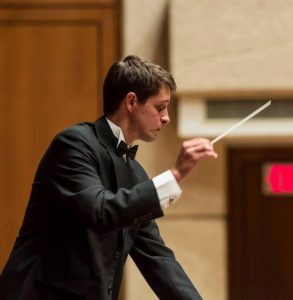 Ben Stonaker (b.1981) earned his DMA in Composition from the University of Texas at Austin where he was the assistant director of UT’s New Music Ensemble. His music has been played across the US and Canada with international performances in Europe and South America. Described as “outer space lounge music” (KMFA From the Butler School), “layered and richly textured with deceiving simplicity” (Offbeat Magazine), his work often explores sonic environments that highlight unconventional combinations of orchestral instruments within a wide variety of settings – from chamber groups, wind ensemble, and full orchestra to ambitious ensembles like the 2012 premiere of his work for forty-four contra clarinets. A native of Louisiana, he currently resides in New Orleans where he has received a commission from the New Orleans Chamber Orchestra in 2017 and enjoys performing in the free improv scene on clarinets (including bass clarinet and basset horn), prepared melodica, and bowed autoharp. Dr. Stonaker is currently teaching Talented and Gifted Music in Lafourche Parish Schools.

Matthew Banks holds a Bachelor’s degree in music from the University of Evansville, and a Master’s degree in woodwind performance for Texas A&M University-Commerce. An active freelancer, Mr. Banks regularly performs on clarinet, saxophone, oboe and bassoon with orchestras, bands, and his own jazz ensembles in Dallas, Texas. He also maintains a large studio of private students on all four instruments.

Victor Myles Drescher joined the faculty at Southeastern Louisiana University in 2013 as Instructor of Clarinet and Assistant Director of Bands. Prior to this appointment he served for five years as Assistant Director of Bands at East Ascension High School in Gonzales, LA. In 2011, Drescher was honored by LMEA with their Outstanding Young Music Teacher Award, and he currently serves as their University-Research chair. He holds Bachelor’s degrees in Music Performance and Music Education and a Master of Music degree from Louisiana State University. Drescher has also completed postgraduate work at the University of North Texas. His primary clarinet instructors were Steven Cohen, Dr. James Gillespie, Justin O’Dell, Ronald DeKant, and Dr. Mary Alice Druhan.

Mr. Drescher is an active clinician and performing artist for Backun Musical Services and has performed as a soloist at venues as wide ranging as the Meyerson Center in Dallas, Carnegie Hall, and the House of Blues in New Orleans. He performed in recital at the 2014 International Clarinet Association’s ClarinetFest, the 2018 American Single Reed Summit, and regularly performs as a featured soloist with the Louisiana Sinfonietta, the Southeastern Wind Symphony, Symphonic Band, and Symphony Orchestras. Drescher has served as the principal clarinetist with Opera Louisiane and the Louisiana Sinfonietta since 2007 and performs with the Baton Rouge Symphony, Acadiana Symphony and Gulf Coast Symphony Orchestras. He is also a champion of new music premiering multiple works every year including collaborations and commissions with local composers. His playing can be heard on the Centaur record label performing works by composer Dinos Constantinides.